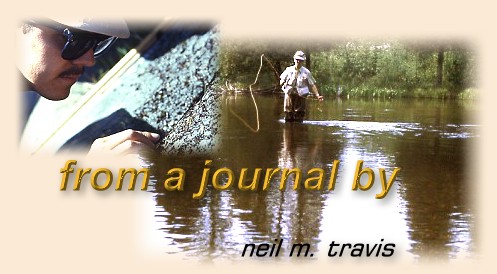 Fly fishers often speak of two types of streams; freestone and spring. Steams that are classified as freestone are generally streams that depend upon precipitation, rain or snow, for their water. Spring creeks rely upon water that emanates from underground springs and generally do not rely upon rain or snow to sustain their flow. The water in a typical spring creek has a higher pH [more alkaline] than most freestone streams which tend to have a lower pH [be more acidic]. Aquatic weeds favor water that is more alkaline, and water weeds provide plentiful oxygen and food for a greater diversity of insect life than the typical, more acidic freestone stream. In addition, streams that receive their water from springs tend to be more stable than freestone streams. Springs provide a constant flow of water, and since the water originates below the surface of the ground the water temperature fluctuates very little throughout the year. In late summer when the local freestone stream may have water temperatures in the 70's or even the low 80's the temperature of the adjacent spring creek will be in the low 50's. When the freestone river is locked in the grip of ice during the depth of winter the spring creek will be ice free and the temperature will be only slightly lower than it was at the height of summer. Tail waters, sections of stream below bottom release dams, share many of the characteristics of spring creeks and thus are usually very productive.

As noted earlier streams that have their primary water source provided by springs are far more stable than rivers that depend upon rain and snow. The key is stability, both in flow and temperature. Streams that depend upon rain and snow as their primary source of water are subject to wide variations in volume and temperature from year to year. In dry years these streams will be very low and the water temperature may rise to levels that will severely impact all of the aquatic life within the stream. In some cases sections of the stream may actually stop flowing and even become dry. During years of abundant precipitation flooding may occur which scours the streambed sweeping away aquatic insects and changing the morphology of the entire stream. When the flood waters recede some sections of the stream may be choked with silt that was scoured from the surrounding fields that were inundated during the period of high water. This silt will smother the eggs of trout that were buried in the gravel and aquatic insects that live on the rocks and gravel. During the winter months water temperatures fall and plant and insect growth ceases or proceeds very slowly. If the water levels are low and the air temperatures are very cold anchor ice, which is a type of ice that forms on the rocks and substrate on the stream bottom, may have a serious impact on the aquatic invertebrates that live on the rocks and in the gravel on the stream bottom. These harsh environmental conditions limit the amount of available food to fish that live in free stone streams and, as a result, they tend to be less selective. Note that I said 'they tend to be less selective,' because during certain situations free stone trout can be as selective as any persnickety spring creek fish. However, as a general rule freestone trout are more opportunistic feeders given the fact that food is more limited than in spring creeks and tail waters.

Trout found in spring creeks and tail water streams enjoy a plethora of food throughout the year. Stable temperatures and flows allow trout that live in these waters to avoid all the environmental ups and downs that freestone trout experience. Anchor ice is unknown, high water and resulting flooding is rarely occurs, and since the source of the flows are generated by springs or water releases from dams they never experience low flow conditions. This allows the trout to accomplish several things that their relatives that live in freestone streams cannot realize given the environmental conditions under which they live. Stable water temperatures allow the fish to feed more actively throughout the year since their metabolism does not fall due to cold water temperatures. Food is continually available because of the stable conditions and the trout take advantage of the food contributing to their growth. Thus spring creek and tail water trout are continually eating and growing and because of this plethora of food these trout can afford to be selective. They don't have to eat every bug that comes along and that includes flies presented by anglers. This situation has created the myth that spring creek and tail water trout are very selective, and that selectivity is because they are intelligent. That idea may help to heal the ego when a fish with the brain the size of a small pea consistently refuses your fly but the reality is that spring creek and tail water fish are no more intelligent than the fish found in freestone streams. It's all driven by the environmental conditions where the fish live.

There are other conditions that make spring creek and freestone trout more difficult to fool and that is the way that the water flows. While both types of streams will have flat sections and broken water sections most spring creeks and tail water streams are characterized by smooth, flat water. Underneath this flat water are weed beds that cause the currents to undulate in unpredictable ways creating drag problems for the angler that are virtually unknown to anglers that fish in freestone waters. This drag, sometimes described as micro-drag, is the cause of many of the myths that have developed about the selectivity of spring creek and tail water trout.

The abundance of food in spring creeks and tail water streams is probably the major reason that trout living in these waters have gotten the reputation that they enjoy. Trout living under these conditions can afford to be choosy. Just sit and watch a trout feeding on a good hatch on a spring creek or tail water fishery. Watch closely and see how many naturals float overhead that the trout totally ignores. During a heavy hatch it may be hundreds of individual insects. These trout have the luxury of being picky because they have so many choices. If no insects are hatching spring creek and tail water trout merely have to poke their head into the nearest weed bed and it will find a wealth of edible goodies.

Spring creek and tail water trout are no more intelligent or crafty than other trout. The angler that approaches these fish with the knowledge about the living conditions where these fish live will increase their chances of increasing the number of hook-ups they will enjoy. Don't blame the trout for your inability to hook them, or credit them with intelligence when their refusal to eat your offering insults your ability.